« Can the NFL Really Crackdown on Players’ Misconduct?
Best Chance For Rams to Win is With a New Deal for Bulger »

Well, it has been reported that the NFL Security office has offered their services to help 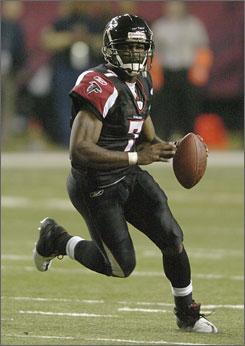 with the Michael Vick dog fighting investigation. OK. So enough is enough. Just after I applauded Roger Goodell’s clean up the NFL mantra, I think I have to say he is making me have a strong desire to see Tags back in command. Please let the investigation run its course. What happened to being innocent until proven guilty? It seems like this case has been out in the open for several weeks and they still don’t have much if any proof to charge Vick with anything. According to the AP, Gerald Poindexter, the prosecutor, states that they have “no solid evidence” and “no eyewitnesses”. Hmm, what exactly does the NFL think they can do to help with this case? I am definitely starting to understand the thinking behind the cries that somebody’s “out to get” Vick.

It’s kind of funny, but what is clearly lost in this fiasco is the fact that the original purpose for entering the home, a drug raid, is an after thought in this discussion. Whatever happened to that? I mean, everyone thinks drugs are bad, but the dog fighting issue is debatable. Just ask Clinton Portis for his opinion.

“I don’t know if he was fighting dogs or not. But it’s his property; it’s his dogs. If that’s what he wants to do, do it.”

So, Roger, please continue the standard comments of this is not acceptable, he will be fined, he will be suspended, yada yada, but keep your job in perspective. You’re the commish of the NFL, not the head of the CIA.

As a side note, somewhere Pacman Jones has to be smiling now that the spotlight is off of him for a while.