Green to the Dolphins Finally Set to Get Done? 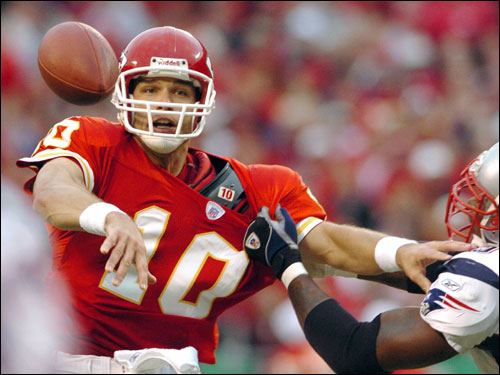 The leagues longest awaited trade ever may finally happen soon, as reports say that the Dolphins and Chiefs may finally be close to getting a deal done for lame duck quarterback Trent Green. For months this deal has been on the table, and the two teams have gone back and forth with different demands trying to get the deal done, only to then have it pulled off the table. Now sources say the Dolphins may finally give in, giving the Chiefs more than the 6th round draft choice they had been offering before.

Green is going to attend the Chiefs upcoming organized team activity sessions, which start on Monday. If something unforeseen happens, such as Green getting hurt, the Chiefs may be sitting on a QB they don’t want anymore, making a whopping $7.2 million this season. This according to sources is all the more reason to get Green out of KC and get the deal done soon. And while the Chiefs could ask Green to stay away from being at the sessions, they cannot make him, meaning that it would be smart on his part to be there, basically forcing the team to push the buttons to move him.

Recently Green stated on WHB-AM Sports Radio 810 in KC that he was anxious for the deal to get done. “We’re just kind of treading water and it seems like it’s been this way for a couple of months now,” Green said. “Really, the best fit for me has been Miami. … It’s the same offense … I just felt a real comfort zone there.” In Miami Green would be playing under two of his former QB coaches – head coach Cam Cameron and Terry Shea, who was with Green in KC. “I’ve got a few more years left to play,” Green told WHB. “The fact remains that at some point in time the Chiefs will have to release me because we won’t restructure just because of the way the [$7.2 million] contract is set up.”

Miami is desperate at the QB spot, as at a recent mini-camp drafted QB John Beck, who will likely be the QB of the future, was lost in trying to read defenses. Former starter Daunte Culpepper is still trying to make his way back from his knee injury, and rode the bike and jogged only during the camp, and two other QB’s on the roster – Gabe Hamdan and Cleo Lemon, have just one pro start between them. Upon grabbing Green from KC, he would from day one be the teams starter, and likely Culpepper would be trying to find a new team as the fish would release him after just one season on the roster.